Shandong, the coastal province in East China played a major role in Chinese history from the beginning of Chinese civilization.

Shandong is best known as the birthplace of Confucius; here you will find his hometown Qufu. Mount Tai is the most revered mountain in Taoist beliefs, and a site with the longest history of continuous religious worship. Chinese emperors went on pilgrimage here to worship the Heaven. 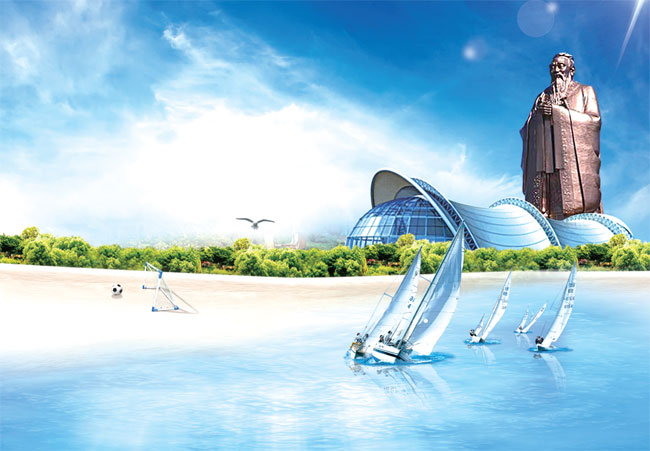 The capital of the province, Jinan is called “The City of Springs”. The city lays on 800 hot springs. Shandong is a virtual museum of China's past, mingled with evidence of its frenzied transformation into a modern society. Nowhere it is more clear than in the coastal gem, Qingdao. Walk on the old European architectural style streets while looking at the modern skyscrapers in the horizon. 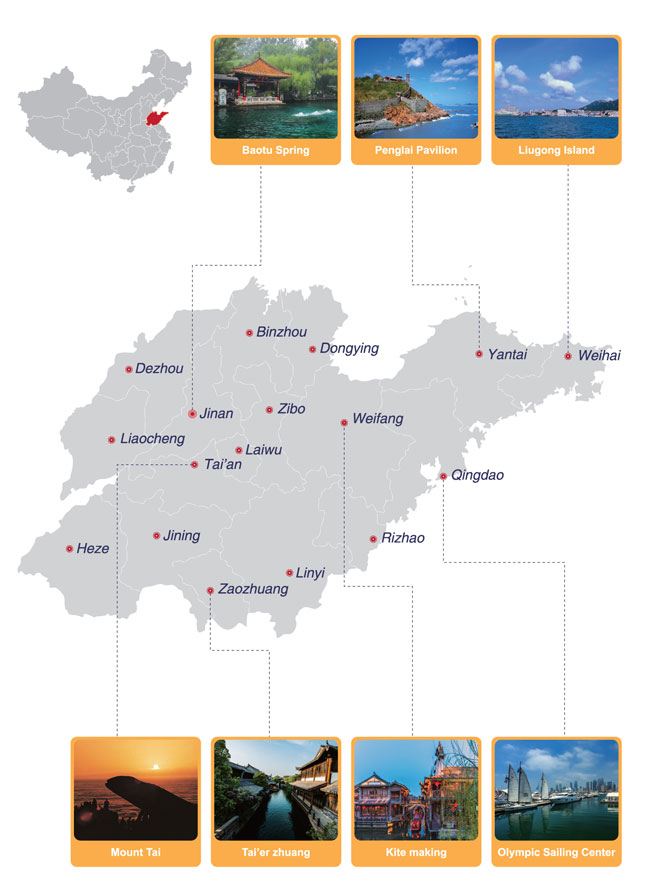 Jinan, the capital of Shandong sits atop 800 springs and surrounds Daming Lake. Enjoy the babbling springs or take a boat tour of Daming Lake. Baotu Spring, the most magnificent of artisan wells was declared the "Number One Spring under Heaven" by Emperor Qianlong of the Qing dynasty. This splendorous spring hosts The Lantern Festival, which begins the Chinese New Year and lasts for one month. 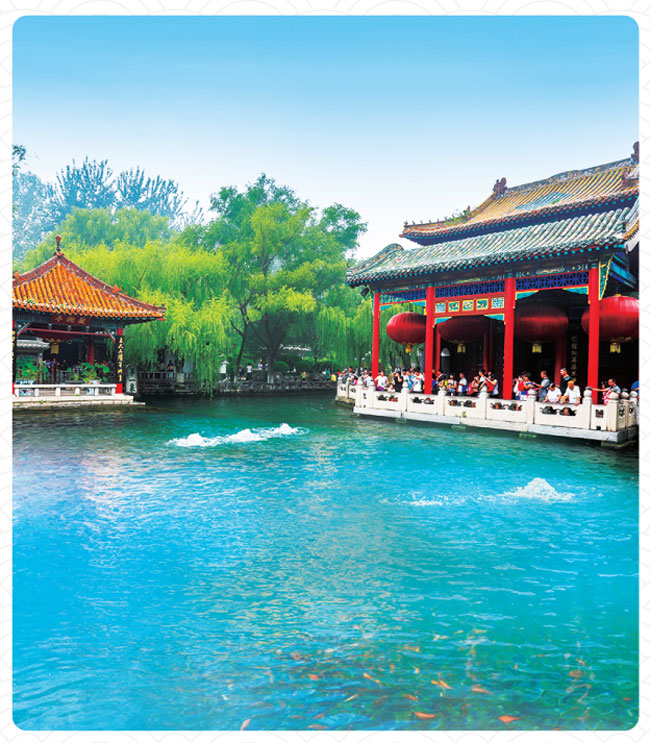 Qufu, the hometown of Confucius, boasts having many noteworthy temples, palaces and cemeteries. If you're a history buff, you'll find yourself in Qufu.

San Kong, or The Three Confucian Sites are a must see. These UNESCO protected wonders are epicenters of living culture, and include The Temple of Confucius, The Kong Family Mansion and The Cemetery of Confucius. 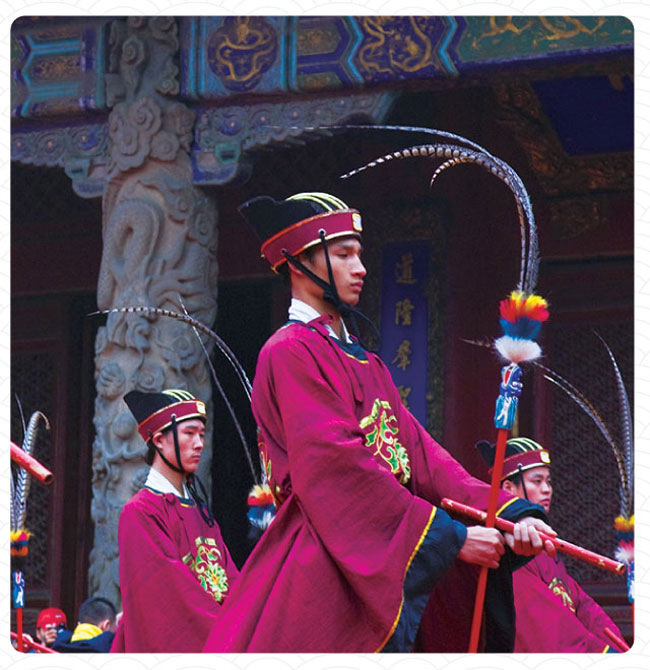 Qingdao is a charming metropolis on the Eastern shore of Shandong, its home to a unique mix of European and Asian culture. Qingdao is renowned for Tsingdao beer, breathtaking beaches and colonial architecture. If you're looking for a mix of the contemporary and traditional, you will love Qingdao.

Fantawild Dream Kingdom is regarded as an Oriental Fantasy Land, but others call it Chinese Disneyland. Fantaworld offers fun for the whole family and features Venetian carnival costumes, roller coasters, terracotta warriors, dinosaurs and a performance of the 16th Century novel A Journey to the West. 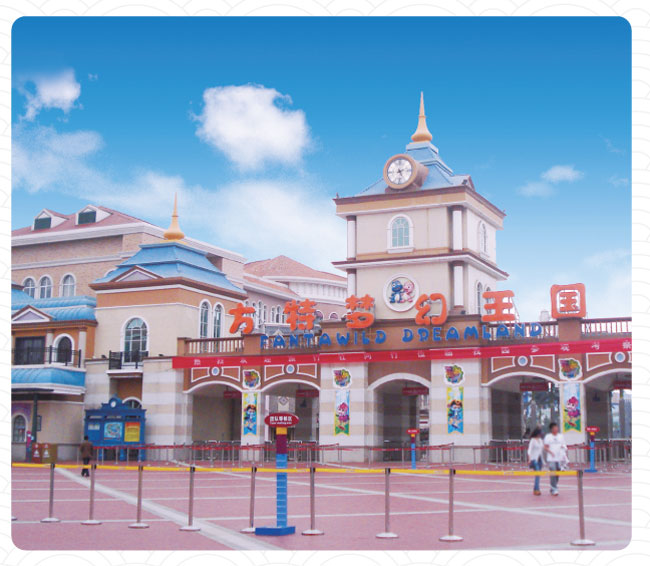 Beer connoisseurs will enjoy a tour of the famed Tsingtao brewery. The Tsingtao Beer Museum gives visitors a glimpse into the making of this German style beer. The building dates back to 1903, and has a history as unique as the beer made there. Visitors can sample the various freshly brewed beers and buy souvenirs. 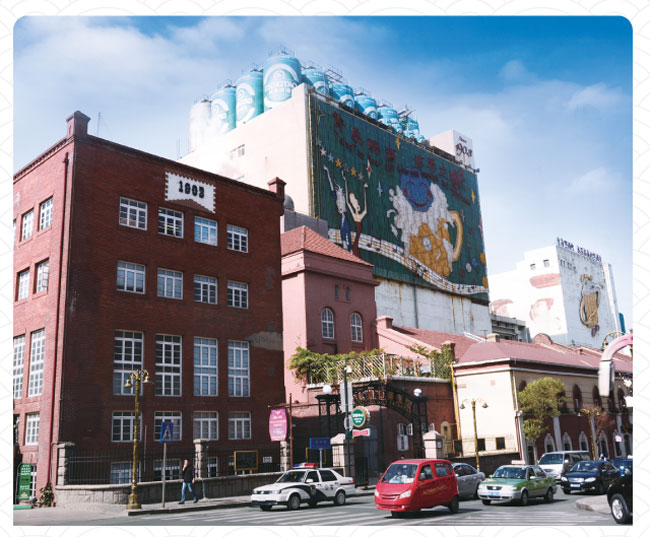 Weifang is the Kite Capital of China and hosts the annual Kite Festival, where you will enjoy the magnificent sight at the thousands of kites in the sky. 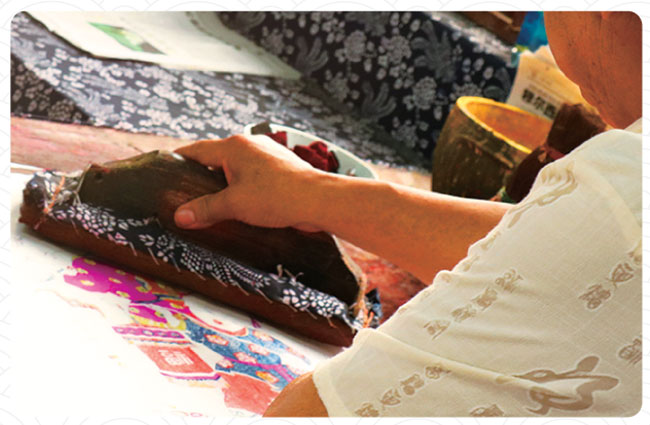 Tai'an, known as the Foot of Mount Tai, is the home of the Neolithic Dawenkou culture, which existed about 6,000 years ago and is known for its incredible pottery. 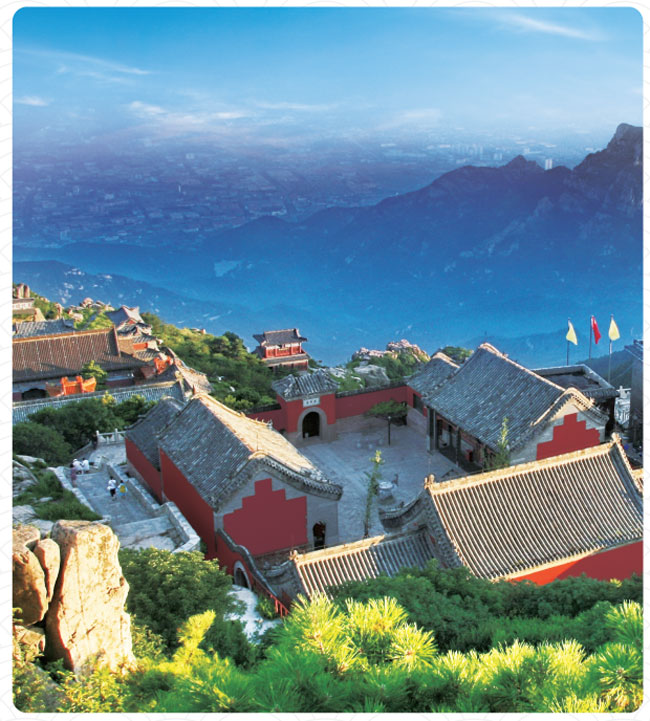 Mount Tai is the most revered of the five sacred mountains and is where Heaven meets Earth. This majestic mountain will leave you awe-struck.

Penglai Pavilion Scenic Area boasts numerous palaces and temples. The complex's columns are adorned with works of calligraphy and carvings in stone by famous writers. In addition, the myth of the Eight Immortals, a tale of heroism, originated in this inspiring pavilion. If you're a bibliophile, you'll find yourself in Penglai.

Zaozhuang is known as the Biggest Pomegranate Orchard and the home of the philosopher Mozi. 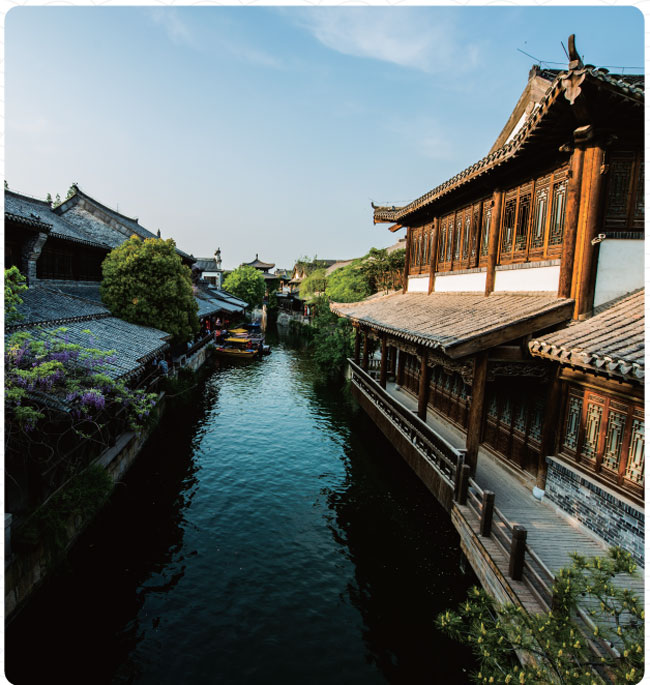 The World Cultural Heritage site of Tai'erzhuang Ancient Town is at the center of the Beijing – Hangzhou Grand canal, nestled in Zaozhuang City. It's known as being the most beautiful water town in China.

Begin your journey with 4 days of sightseeing in Beijing. After a tour of China's capital, you'll head to Jinan, the capital of Shandong, to take in more than 5,000 years of history. While in Jinan, you'll visit the Black Tiger Spring and Daming Lake – two of the most famous landmarks in the region. Continue to the Hometown of Confucius, Qufu. While in this historic city, you'll tour the Temple of Confucius (Cemetery of Confucius and the Kong Family Mansion optional for US$39). In the morning, you'll enjoy the opening ceremony at the Temple, a beautiful performance with dancers in ethnic costumes and thunderous drums. Next is the train to the, Suzhou, followed by Hangzhou and finally the modern metropolis of Shanghai.

Begin with a 3 day tour of Beijing. After a fascinating look at China's capital, you'll arrive to Jinan, the land of Confucianism, and capital of Shandong. While in Shandong, your spirits will be lifted by hot springs, the beauty of Mount Tai and local cuisine. In the small town of Qufu you'll experience the rich cultural history of Confucianism, meet interesting characters in the ancient Town of Tai'erzhuang, paddle the canals in a gondola and take in ancient architecture, temples and traditional dwellings.

Arrive to Jinan, the City of Springs and experience the spender of Baotu Spring. Next stop: Tai'an, the city at the foot of Mount Tai. Walk a winding path to the peak (known as Jade Peak) and learn the local history. Great the next day with a tour of an ancient city, Tai'erzhuang, visit Mazu Temple, Alcohol Museum, Catholic Iglesia and spend the night in this romantic town. The voyage continues with a tour of Qufu, the Hometown of Confucius. Finally, return to Baotu Spring, visit Daming Lake and Thousand Buddha Temple in Jinan.

Arrive to Jinan, the City of Springs and tour Daming Lake, in the city center. After an educational and interesting walk on Mount Tai you'll take a ride in a cable car to the peak, called Jade Emperor Peak. The next day you will visit Qufu, the hometown of Confucius and learn about the philosophy that influenced Asia. The journey continues to the coastal city of Qingdao, a city of beautiful architecture inspired by European and local style. Finally you'll visit Mount Lao and tour a famous Taoist temple – Taiqing Palace.

Embark on a five day tour of the beautiful coastal city of Qingdao and visit the first pier of Qingdao – Zhanqiao Pier (built by the Germans in 1902), Mount Lao (the Taoist Mountain), the Eight Great Passes, Badaguan, Qingdao Olympic Sailing Center, Former Governor's House, and the ancient fishing town of Han Family Village.

Tour starts in Jinan, with a visit to Quancheng Square, Baotu Spring, Black Tiger Spring, Daming Lake and the Thousand Buddha Mountain. Next is Mountain Tai - the eastern mountain of the Five Great Mountains of China. It's associated with the sunrise, birth, and renewal, and is often regarded the foremost of the five. Take a cable car to South Heavenly Gate at the top of the mountain. While at the peak, visit South Heavenly Gate, Heavenly Street, Jade Emperor Peak, Inscription on the Cliff, Sun Rising Peak, Dai Temple and more. Qufu is the hometown of Confucius; walk through the Temple of Confucius and visit the Six Arts City; here you will see a Confucian ceremony. Next, visit the hometown of philosopher Mencius, Zoucheng and the nearby Mount Ni. Finally see Jinan, the Land of Springs.

Confucius has brought Shandong under the global spotlight, yet the provinces historical and cultural significance are often overlooked. Go off-the beaten track to find the oldest Chinese settlement, see China's most sacred Taoist mountain and visit the birthplace of Confucius, where you can learn about his profound impact on global philosophy and ethics at the Confucius Temple, Mansion, and Forest. Improve your cultural understanding of China by visiting a local school and attending an etiquette and archery workshop. Meet traditional artisans at Yangjiabu and visit the Yantai to see the Penglai Pavilion, one of the Four Great Towers of China.

The highlight of the educational tour is the Temple of Confucius and the Kong Family Mansion, where you will wear the traditional Chinese dress and participate in a Confucian obeisance ceremony. Ancient lute music and the tea ceremony in the end will fit in perfectly. Then, you will go to Shangjiushan Ancient Village in Zibo to experience the local life and go to the Yangjiabu Folk Arts Village where you will get to make you own Kite and a wood engraving! At last, you will visit some museums like Chinese Textbook Museum, the Zibo Soccer Museum, and the Qingdao Beer Museum. Please contact us to get the whole itinerary and know more excellent ideas.

Great Bullet Train connections with all the major cities:

To help you discover ways to explore the world, we're pleased to share our digital magazine, The Travel Magazine Online.

Save money and escape the crowds. Hot Deals and multi-port packages. Savings of up to 50%!

Our free app that allows you to carry all of the destination information you need while traveling, right in your pocket!

Do you need a Travel visa or passport? A CIBTvisas specialist will manage the entire process from start to finish, providing the expertise necessary to ensure your request is approved as quickly as possible.